In a recent survey by Petfinder, 33 percent of adoption groups said they’ve had pets who were posted on Petfinder for 1-2 years without being adopted, and 27% have had pets who’ve waited more than two years for a forever home. According to their survey, 30% of these are senior pets, 15% are those with medical problems, 13% are victims of breed prejudice, 10% are shy, and 10% need to be the only pet.

I recently spoke with Ken White, the president of the Peninsula Humane Society & SPCA in San Mateo, CA. Ken shared a beautiful success story of a dog that falls into the category of breed prejudice. Pictured above is Mr. Biggs, truly one of the larger pit bulls. Weighing in at 100 pounds, this intimidating-looking dog was obviously a total sweetheart but harder to adopt due to that breed and size. Close to 9 months after coming into their care, Mr. Biggs was adopted by a family with three young daughters. The photo tells you how well that has worked out. 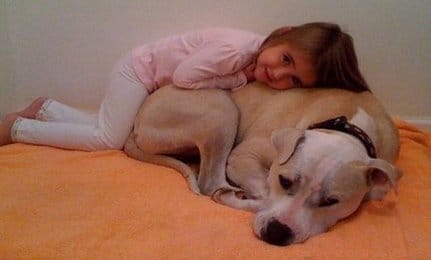 From the dad of the household: “Dear Ken, this is a photo of the wonderful pit bull that we adopted from your agency. The dog was ‘Big Blonde’ at PHS/SPCA but has been re-named ‘Mr. Biggs’ by my three daughters. The photo includes my youngest daughter, Claudia, who hugs Biggs every day, hangs on his neck, and generally does the sort of things kids are prone to do but many dogs might find annoying. Not Mr. Biggs! He only responds by licking her profusely!! Biggs has been a wonderful addition to our family.”

PHS/SPCA has a large number of senior pets and specializes in getting those pets adopted. Ken says, “Our older pets are like frogs, more than ready to turn into princes and princesses once they come to the right loving home.”

There is a link on the PHS/SPCA website called “Benefits of Adopting an Older Pet” with a wealth of information. It states that one of many benefits of adopting an older dog is that you know what you are getting in terms of size, physical appearance, temperament, and health. Also, older dogs have a longer attention span, and often give more recognition to their trainers than puppies and young dogs do. Whoever said you can’t teach an old dog new tricks didn’t take that into consideration (and also didn’t know about clicker training).

Thinking of adopting an older cat but you already have a dog? An adult cat will soon set boundaries and decide with the dog who belongs where, and when. Want a kitten for your kids? Think again. Young children can sometimes be very rough with a kitten. Adult cats, on the other hand, seem to tolerate a certain amount of handling from kids, yet they still leave when enough is enough.

Pets with medical problems are also harder to adopt. Not true for Princia, says Christy Wishon from Palo Alto Humane Society. She was a feral cat living in Mountain View, CA who was shot three times. One of the bullets was in a front leg that needed amputation. Two more bullets were lodged in her body. One was removed during surgery, thanks to the donated services of Adobe Animal Hospital. Rehab was lovingly donated by Scout’s House in Menlo Park, and Mid-Peninsula Animal Hospital provided free boarding.

Her third bullet, you ask? Well, it’s still in her. It’s lodged in her chest and is too dangerous to remove. Princia transformed during her recovery and her name was changed to Trilogy. Palo Alto Humane Society did a very selective adoption process, screening over 25 potential adopters. Trilogy is living a very happy life with a senior couple that dotes on her.

For a cat with such extreme health issues, why did dozens of people want to adopt her? Because her story got the attention of the press. It helped her in every way, but there are also thousands of cats with similar stories that don’t make the headlines that are needing forever homes. Let’s make every week “Adopt-A-Less-Adoptable-Pet-Week” and make every story about a homeless pet finding a forever home newsworthy.

Have you adopted a less adoptable pet? Please add a comment below and share your success story.