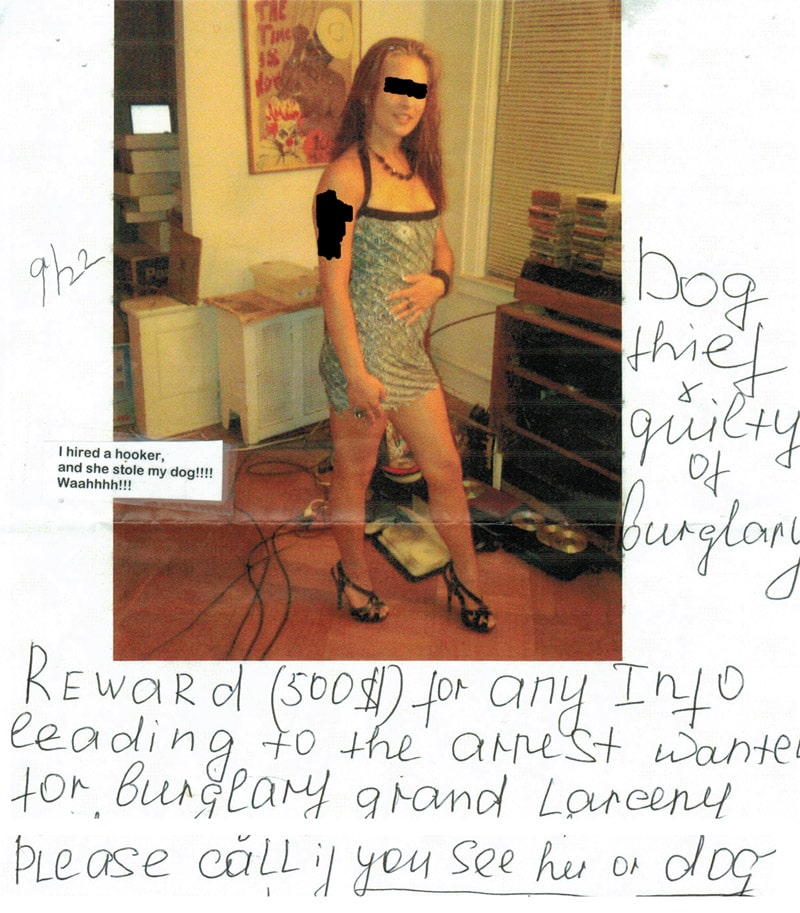 It's the case, it seems, of a guy hiring a prostitute ... who then stole his dog.

Journalist and editor Aaron Naparstek was at the Park Slope Food Co-Op grocery store in Brooklyn the other day, just minding his own business, when he came across one of the most bizarre "reward" posters ever.

The poster says: "Dog thief & guilty of burglary. REWARD of (500$) for any info leading to the arrested wanted for burglary grand larceny. Please call if you see her or dog." Then, tacked on the left side is what Naparstek believes could have been added by a Co-Op staffer: "I hired a hooker and she stole my dog!!!! Waahhhh!!!"

Naparstek wiped out the number and the identifying eyes and hooker stamp, so we were unable to contact the poster, whose first name appears to be John, for comment or an explanation. Naparstek may be on to something with his observation on the "hooker" tag: We're not entirely sure this is real.

First of all, how come there's no mention of the dog's description? How is anyone supposed to spot the dog without knowing what to look for? And whoever heard of a hooker posing for a photo before having sex with her? Sure, maybe this is the photo she advertises with, but that sad stack of boxes and CDs in the background just reeks of "bachelor pad."

I’m generally a big fan of the Park Slope Food Coop. The fresh produce and low prices can’t be beat. It’s a great community center and I always run in to friends and colleagues when I’m shopping and working there. The Coop provides a steady customer base for a slew of outstanding food producers around New York City while taking dollars out of the industrial food system. And in this age of market hegemony the Coop shows that when done right, socialism can really work. The Coop grossed nearly $40 million last year and, by some measures, is now substantially more profitable and efficient than capitalist counterparts like Trader Joes and Whole Foods, according to Fortune Magazine. Thanks to the Park Slope Food Coop, the creeping threat of socialist grocery shopping is growing. There are six other food coops in various stages of formation throughout Brooklyn right now. Take that, Glenn Beck.

But, man, if we’re being honest about it, let’s acknowledge that Park Slope-style socialism can also be a pain in the ass. If you miss a shift or two you’re doomed. My Food Coop membership status is in a nearly constant state of “alert” or “suspension” and I seem to spend most of the year digging out, paying back my debt to society with extra work shifts.

And there was that one time last year when the woman checking out my groceries, a volunteer member-owner like myself and everyone else who shops at the Coop, made two full-fledged business phone calls while very slowly and distractedly running my items through the bar code scanner. When I begged her to stop dialing and hold off on her third phone call until after she’d finished checking me out she snapped back something like, “Look, man, I work for Impoverished New Yorkers Seeking Justice. And this phone call, is a lot more important than that.” She pointed scornfully at my grass-fed organic hamburger meat. You might get some gum-snapping attitude at the Key Food but the checkout lady is never under the illusion that she’s doing you a big favor.

My job at the Coop is “receiving.” I’m, essentially, a stock boy. I bring items up from the basement and put them on the shelves. Currently, I find myself on a work squad with somewhat overbearing, Type A management. During my last shift, an obsessive compulsive Coop coordinator harangued me repeatedly for stacking eggs without facing the expiration dates forward. I pointed out that the eggs were all expiring on November 12th — in six weeks — and that every single egg carton I stacked was likely to be picked up and purchased in a matter of hours. And besides, in a previous egg stacking episode, the Coop’s chief egg buyer gave me detailed egg stacking instructions (yes, there is a special technique for stacking egg cartons), specifically telling me that the eggs fly off the shelf too fast to spend time worrying about expiration dates. Though I did comply with her orders, the Coop coordinator clearly didn’t appreciate my back-talk and I got the feeling that I was on my way to being brought up before the sexual harassment and racism committee.

So, at the end of this last shift I decided I needed to get myself moved to a new work squad. As I headed up the stairs to the Coop office, a flier on the public bulletin board caught my eye. It showed a tattooed woman in a short, shiny dress and stiletto heels posing somewhat awkwardly in a messy looking room. Scrawled next to the photo, the flier read, “Dog thief and guilty of burglary.” The flier’s author was offering a $500 reward for any information leading to her arrest. “Please call if you see her or dog,” the poster urged. Then I leaned in closer to read the fine print:

Granted, it looks like the “I hired a hooker…” label might have been printed and taped on to the flier after this had been posted, perhaps as commentary by a Coop office worker. But the whole thing is still pretty outstanding. After blacking out the alleged perpetrator’s eyes and arm tattoo and deleting the phone number of John the Dog Owner, I share with you the Park Slope Hooker Dog Thief. Hide your puppies.