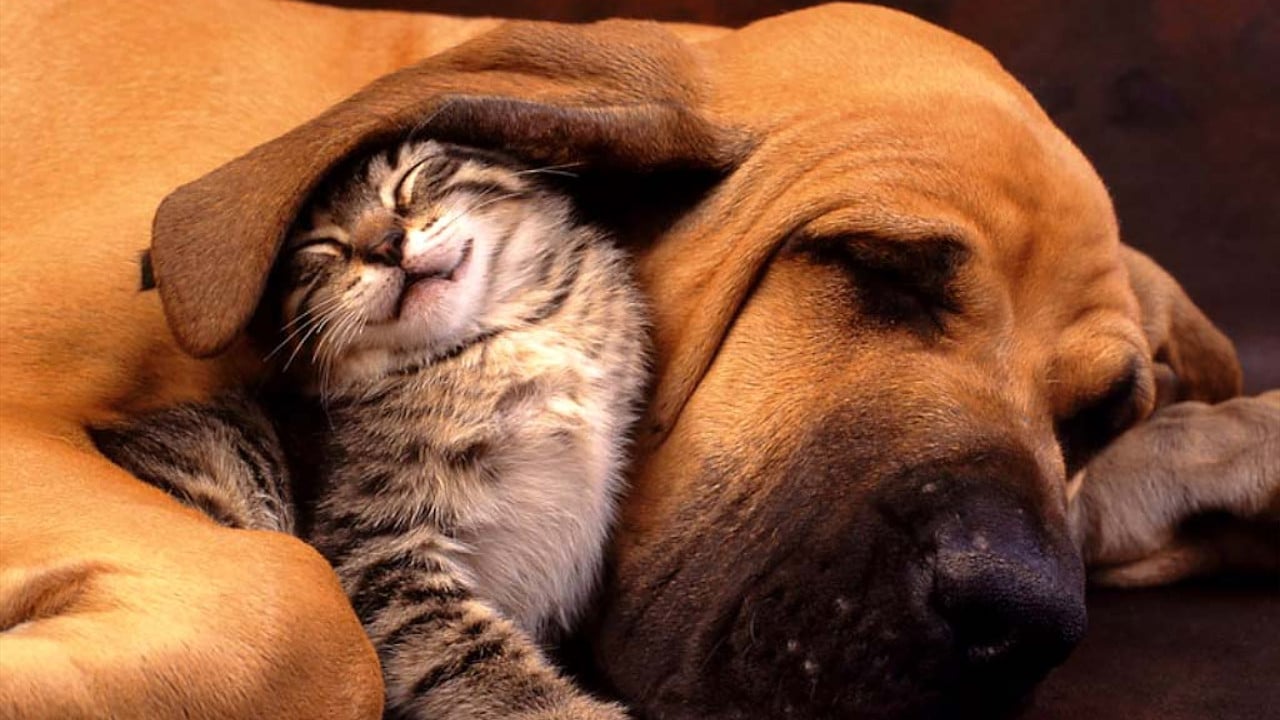 It is commonly thought across the world that cats and dogs are natural-born enemies. Cartoons present this age-old belief time and time again with cats often portrayed as the wily, clever species and dogs the dummies constantly chasing them. Is this simply a myth or will cats forever be dog’s nemesis?

Do cats and dogs hate each other?

The simple answer to this is no. Cats and dogs are not born with an inherent hatred for each other. They are born with predatory and survival instincts, respectively, have conflicting communication methods, and behave very differently to one another.

Not unsurprisingly as they are different animals. These are fundamentally the contributing factors to the perception that cats and dogs are natural-born enemies.

Like humans, cats and dogs are predators. Interestingly, you can usually identify predators from prey by eye position. Animals that have eyes positioned on the side of their heads are generally prey animals.

Even though they are both predators, cats and dogs have distinctly different ways of going about hunting. Dogs, both sight and scent hounds, will give chase once their eyes or noses pick up on something. Cats tend to lie in wait and pounce.

Dogs work in a pack that has a hierarchy and will back down at feeding to a more dominant member. Whereas cats are lone stalkers and are far less likely to retreat when confronted by another animal vying for their food.

These intrinsic behaviors often result in dogs chasing cats, cats hissing and clawing at dogs, and the two of them (as the old saying goes) fighting like cats and dogs.

There are some key ways in which cats and dogs communicate with their own species that directly conflict with one another. When you look into them a little more closely, it can be easy to see why cats and dogs end up displaying aggression toward one another.

Upon greeting, cats will walk tall and proud to another unfamiliar feline. They look each other in the eyes and blink slowly to indicate that they mean no harm.

Dogs greet one another by creating a semi-circle as they manoeuvre to the butt area for sniffing. This arched approach is accompanied by avoiding eye contact to indicate they mean no harm. Directly approaching and direct eye contact is confrontational in dog speak, but the opposite is true for cats.

Cats rarely move their tails. When they do it indicates they are getting annoyed and are about to become aggressive.

But dogs wag their tails all the time and especially when they are feeling happy. Some move their tails when nervous also, but you could see why it can be confusing for both to see the other making such a gesture.

Almost all dogs love to run! Just for fun! They run around after each other, chase balls or do zoomies for the sheer joy of it.

Cats on the other hand only run when hunting or when fleeing from a fight. Dogs run around after each other and some dogs will try to initiate play this way with a cat. Not all chasing is predatory to a dog, but it is to a cat.

How do cats and dogs behaviors differ?

Another indication given by the eyes is whether an animal is nocturnal. Large eyes have evolved to allow nocturnal animals to see better at night. Cats tend to have much larger eyes than dogs as they generally hunt at night. This means that most cats will get the majority of their sleep during the day.

Dogs will nap during the day but they get the majority of their sleep at night. This can be problematic when sharing the same living space. A sleeping cat does not want to be suddenly woken by a dog and visa-versa.

Dogs are very social animals and enjoy interacting. This is typically in the form of play. Usually in big bouncy movements that can be frenzied if particularly excited. While cats can be playful (if provoked by the mouse on a string, for example), they are more solitary creatures that enjoy relaxed environments. Their movements are considered and only ever frenzied when attacking or defending. A dog’s comical commotion can be quite unsettling for the ever-laid-back cat character.

Cats and dogs are similar when it comes to territory, however. Both will fend off intruders to their territory no matter what species they are. On the streets, if one were to step into the other’s domain, it is likely to cause a reaction. Vocally, dogs will growl, bark and snap. Cats will hiss, spit and meow.

When living together, both cats and dogs need a space they can call their own which they can retreat to should they feel the need to.

Cats and dogs can — and often do! — love each other

Often when cats and dogs are brought up in the same household, there is little-to-no friction at all. As they grow up together, they learn how to interact with one another.

Sure, there might be the odd occasion when one pesters the other but this is alike to squabbling siblings. Growing up together has allowed them to form a cat-dog language. They are accustomed to each other’s presence and neither are aware of the infamous feud between species.

I have worked with owners rehoming dogs into families with cats. With time, patience and guiding hands, in almost all cases, they learn to get along. At the very least, they tolerate each other and co-exist. But in many cases, wonderful companionships develop between them. Playing together, protecting each other, and cozying up to sleep side-by-side.

Emma Bowdrey is an ISCP-trained Dog Trainer based in Prague, where she lives with her adopted greyhound, Swift. Emma has worked with dogs since gaining her qualification in Canine Behavior & Psychology and now runs her own business. Emma uses positive reinforcement methods to make each hound a happy one. She can be found at Four Long Legs -- dedicated to helping you give your dog a healthy and happy life. 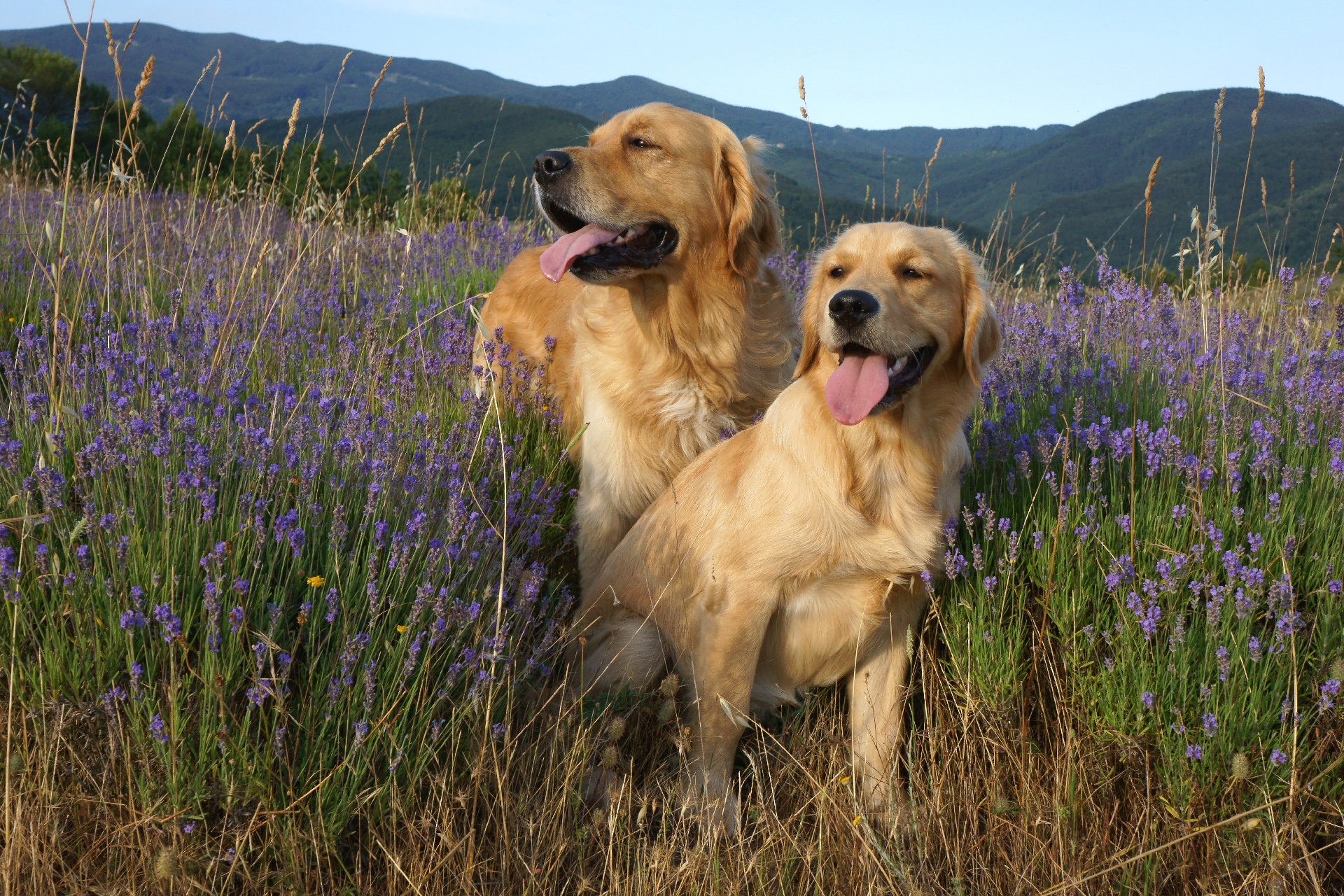 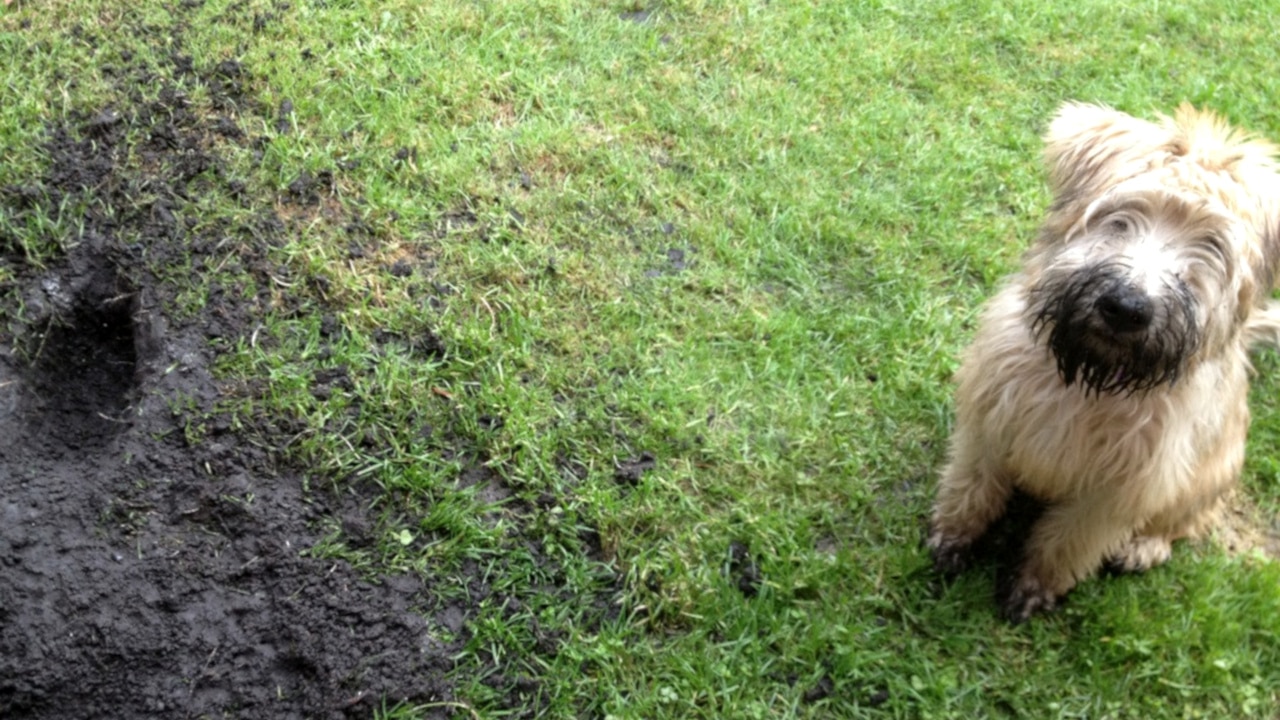 How to stop doggo from digging up your backyard