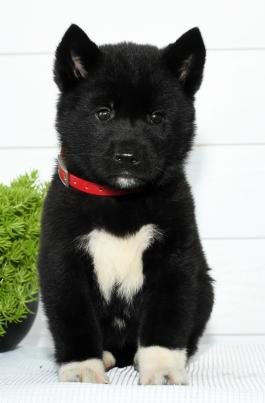 We were given a two month old american Akita puppy. I should have refused but I thought we were up for it, and even though the puppy was supposed to be my sister's he took a liking to me. He was smart and knew how to sit and stay in just a day and a half. Problem was that he required constant attention since he liked shitting on the corridor carpet and even though two days later he was able to stay in a makeshift crate that we made with his own fluffy bed that he never uses and a pee pad on the side he sleeps on. He knew the living room was our space and apart from whining so he could have his exercise because he was afraid of the outside, he was calm. But we had to give him back a few day later since we couldn't afford giving him constant attention, couldn't train him to do his business outdoors since he was afraid, we lived on the third floor, the neighbours were being nosy about the smallest things and would have reported us if they hear or see a dog, and I had a feeling my drug addicted dad would lose his shit once again and quit his job (which he did). So I made a decision to just give him back to his previous owners and with his siblings. Might be because I gave up, might be because I thought he'd do better elsewhere or maybe both. Me and my dad who knew the elderly owners stayed at their house to discuss what happened and watched him manhandle his last remaining sibling. Since we were only together for a few days I thought he'd forget and not pay attention but the fucker chased me and was crying.

A month later my sister revealed to me the dog was dead. He got his head crushed by the door. They didn't want to tell me. I feel terrible.

Sorry for the blogpost.