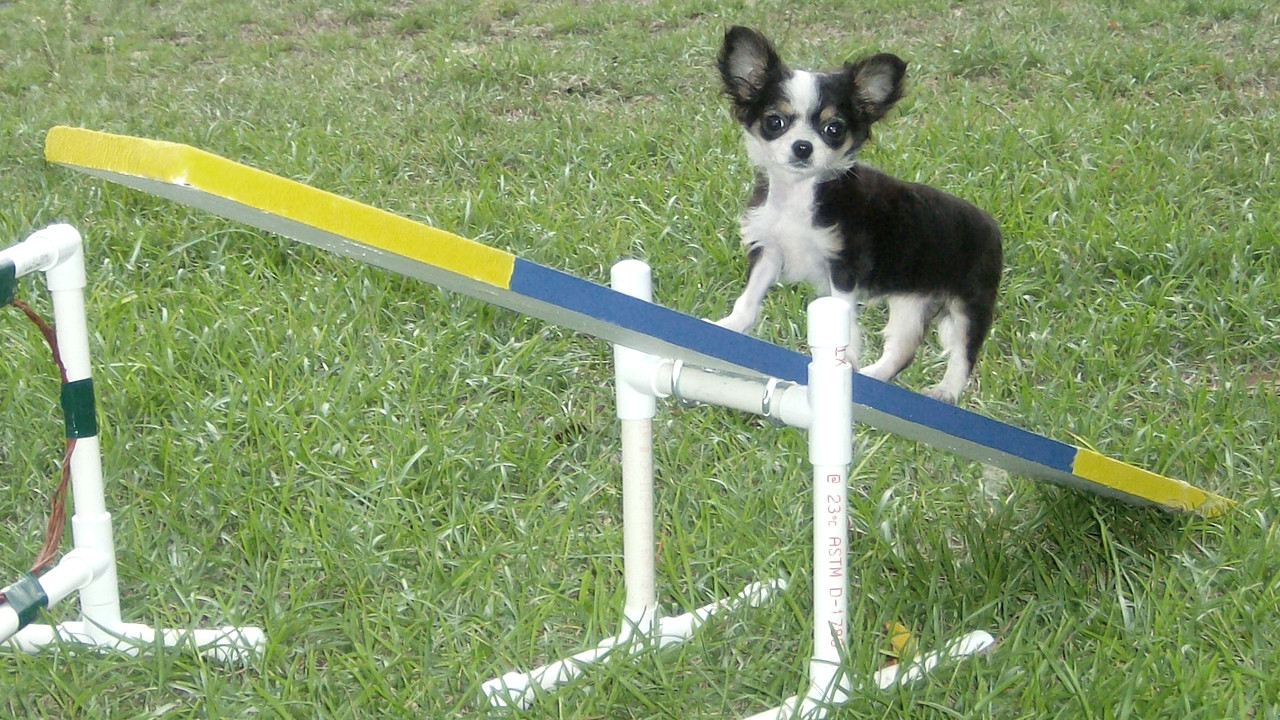 Creating a teeter performance that will work for a tiny dog may be a different challenge than doing the same for a large one. After solid foundation training on wobbling boards, handlers of dogs of all sizes often play The Bang Game (where the down end of the teeter is propped up so that the new down end is only a few inches above the ground; your dog jumps on, pushes it down, and leaves). Then it’s time to teach the specifics of traversing the teeter.

What does an ideal teeter performance look like? Sassie Joiris, who has had much success with her tiny terriers, says "We teach ours to run all the way to the end and wait." Most small dog trainers seem to agree that racing to the end, waiting for the board to fall, and running off is the way to go.

How do you motivate a dog to run to the end of a tipping board? Start with it stationary! Prop it up on two tables, put one end on a chair, or hold the end up. Some trainers use low teeters and prop up one end on concrete blocks. No matter how you do it, start out with a board that doesn’t move.

To get your dog to run up the teeter and to the end, you can offer a treat held from your hand (you can pop it up from under the end of the board so that the dog will be facing straight ahead) or stick a goody directly to the board. Gooey foods like peanut butter, spray cheese, or baby food work well for this. You can also attach something to the end of the board and stick a treat on that.

Sue Phillips explains a trick she learned from a friend who attended a Christine Frank seminar: [Use] a plastic lid attached to the end of the teeter with a piece of elastic around the board. It’s easy to take on and off.

The next step varies by trainer. Some get a solid performance running to the end before they introduce movement. Others work on movement right from the start, lowering the board as their dog eats the treat. Joiris says, "As soon as the dog starts licking the treat off the board I start slowly lowering the board; if the dog gets worried and stops licking, I stop moving the board until the dog goes back to licking. [I] keep on until board is on the ground."

Introduce movement with care. Joiris says, "When I first start letting the board drop full speed, I put a sand bag on the ground for the teeter end to land on, then switch to my foot, then a folded towel on the ground, and finally just the ground." Phillips has a different method: "When you start to drop it faster, just let go when it’s very close to the ground. Then very slowly over time let go as it’s a little higher and higher. Eventually you can let it drop from full height."

Most trainers also work on the other end of the teeter, encouraging their dogs to run down and off the board as well. Again, they start with it stationary and then allow small movement, sometimes controlled by their foot under the board.

Some trainers ask for a specific behavior at the end of the teeter board. While large dogs might be taught two feet on, two feet off performance, that won’t work for most tiny dogs, who need to exit quickly to avoid being bounced off the board.

A few trainers believe that asking the dog to run to the end and lie down provides better shock absorption and stability. Ginsey St. Croix, who teaches her Papillons this behavior, says, "It is all about shock absorption. I start with the down and it eventually turns into a crouch. If you don’t teach a lowered body position the dog might not realize that it’s easier on their bodies to crouch."

Kris Seiter takes this move one step further and has her three-pound Pomeranian, Melba, lie down and wrap her toes over the end of the board. Not only does this ensure the board comes down, it gives her the maximum force to get the board down while giving her some stability so she won’t be bounced off the board as it hits the ground, says Seiter.

Many other trainers, though, don’t teach the down. Some have found that their dogs resisted moving into that position on the teeter. Others believe that standing in a crouched position allows their dogs to bend and flex, better absorbing the shock of the board hitting the ground.

Nancy Ballerstedt owns two Papillons, one of which has earned agility championships in AKC and USDAA competition. She’s studied years of teeter performances on video and thinks she understands why her dogs resisted doing a down at the end of the teeter: "I noticed that they really use their joints to absorb some of the shock of the teeter board hitting the ground. I think that trying to hold the down position must have been very uncomfortable for them."

No matter how you teach it, the teeter can be tough for the tiny. Be sure that you proceed with care, paying close attention to your dog’s confidence level and enjoyment of your teeter training sessions.