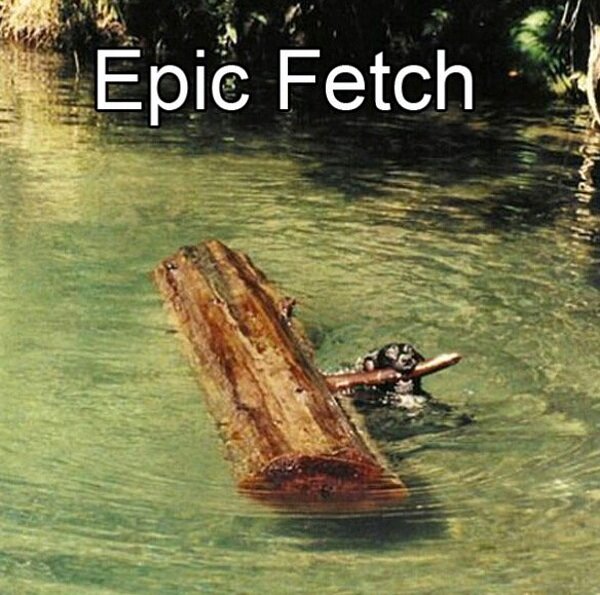 It seems as though what dogs really want to play is “Tag, I’m it!” and have you chase them around the yard. They want to get the toy in their mouth and have you to run after them while they chant some doggy equivalent of “Na ne na ne boo boo! I’ve got the ba-a-all!” Dogs are masters at training us, and we all can learn from their example.

Here are some ideas to try to turn the tables on them! Let’s say you’re teaching your dog to bring back the ball. 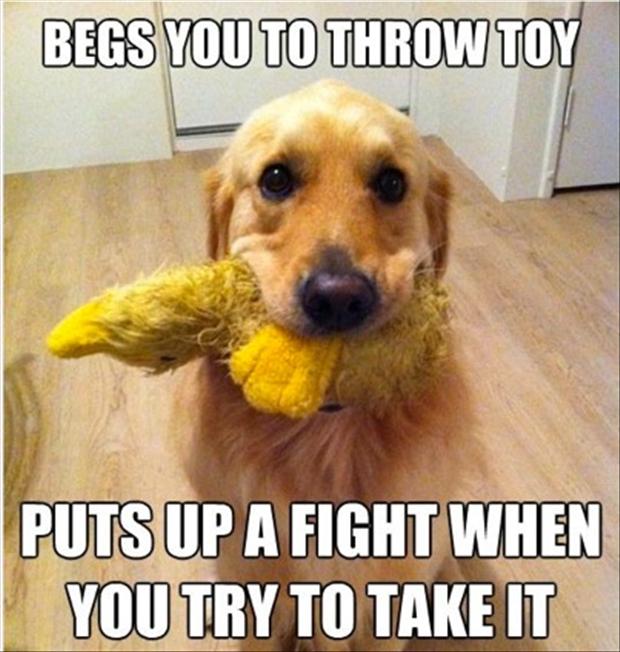 Start by waving a ball about two feet in front of the dog's face (not too close or you’ll push her away). It’s often the movement that attracts dogs more than the object, so get her focused on the ball by moving it back and forth, or bouncing it a couple of times and then tossing it no more than four or five feet away.

If she trots to it and puts her mouth around it, softly clap your hands and run the other way, encouraging her to move toward you. Wait to clap until she has it in her mouth, and resist the urge to say her name or call her to come—this causes many dogs to drop the ball and trot obediently to you. (Do not be distracted by the hysterical laughter of other readers whose dogs pick up the ball and run a hundred yards away in response to hearing their name or the word “Come.”)

If she comes partway to you with the ball in her mouth and then stops and tries to get you to chase her, back up again, clap some more and run away from her to lure her toward you. This game has one rule that can’t be broken: She moves toward you, you never move toward her. If your dog is one of those who grabs the ball and runs, start running yourself, but always in the opposite direction. It’s a rare dog who can resist a chase game, and it’s up to you to decide who is the chaser and who is the chasee.

If she does bring the ball toward you and drops it anywhere near your feet, pick it up and throw it instantly. Most of us tend to pick up the ball, hold it in our hot little paws, and either ask our dogs to sit, spend several seconds praising them, or pet their heads when they’d rather we didn’t. We call this playing fetch. Dogs call it hoarding. They want the ball back, period.

So give it to them! Throw the ball the instant your dog drops it. This sounds simple, but after years of experience, we can tell you that people need lots of coaching on this. When you begin teaching your dog to fetch, either focus on throwing the ball as though it were a hot potato and/or have someone watch you and shout “throw it!” the second you get your hands on it. 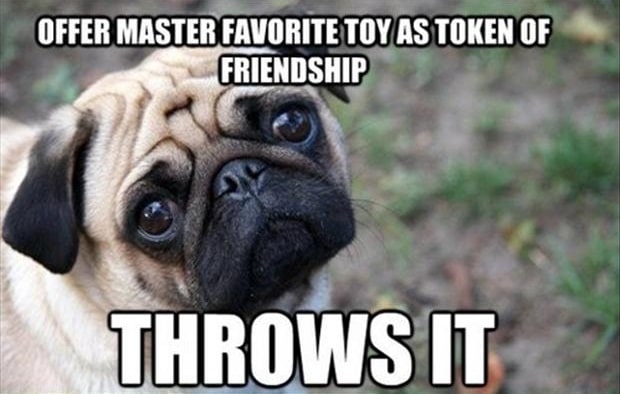 Most young dogs will only fetch a few times, so don’t be discouraged if your dog brings the ball back twice and then stops. This is especially common outside where there are so many distractions. If she brings the ball back two times and then puts it down and ignores it, that’s okay. Game over. Quietly go get the ball and end the play session. If you notice a pattern (say, she fetches five times in a row and then quits), the next time, stop the game after four throws so that you leave her wanting more.

The most common fetching problem is a dog who brings the ball back but won’t give it up. She wants you to want it, oh yes she does, but there is no way she is going to give it up. Here’s where you need to beat her at the “hard-to-get” game. As soon as she’s anywhere near you, fold your arms and turn away from her, refusing to face her or to reach for the ball. Dogs who love the game will keep trying to face you, and many of them will eventually drop the ball. If that happens, swoop it up and throw it as soon as you can. If your dog won’t drop the ball no matter how long you play hard-to-get, try tossing a second ball once she has approached with the first. Most dogs will drop the ball in their mouths as soon as a second one is thrown.

It can take a while to convince a dog to drop the first ball without a second one, but if you continue this throughout several weeks or months, you’ll end up with a dog who reliably fetches without the addition of a “back-up ball.” You can also swap the ball for a treat you’ve kept in your pocket, saying “Drop it” just before you wave the food under your dog’s nose. Give her the treat, then pick up the ball that’s been dropped to get the food, and toss it again.

Some dogs lose interest in the ball if they learn you have treats, but trading a treat for the ball works well for the ones who are committed retrievers. It won’t take long before you can eliminate the treat altogether, because chasing the ball is more than enough reinforcement for giving it back to you. The keys to teaching fetch are to move away from your dog to encourage her to come to you, to reinforce anything she does that approximates fetching at first, and to ignore her attempts to teach you to play “Chase the dog around the yard.”