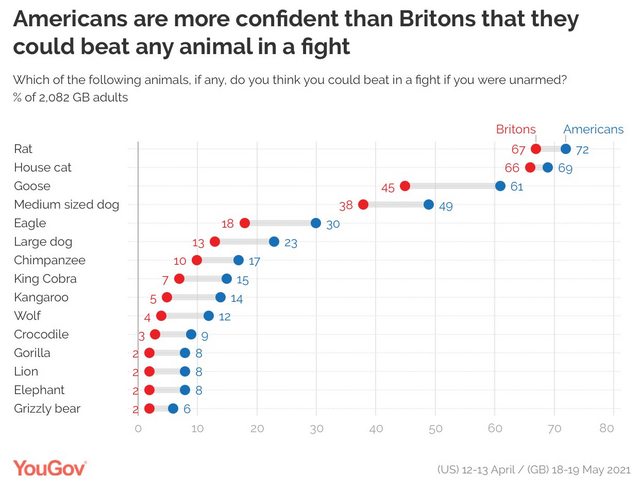 >rat
could, but could die long term due to disease from its bite
>house cat
could with a few scratches
>goose
could easily, maybe some scratches
>medium sized dog
could, could be problematic if he has rabies and manages to bite me
>eagle
tricky one, out in the open it can attack from above and blind me game over. I'd say could most of the times anyway, just need to be careful about eyes.
>large dog
could but difficult, depends on the breed also. Pits can be nightmare.
>chimp
could win 75% of the times. In that cases I think I will sustain some serious injury though
>cobra
could win EZ, the point is the aftermath as it probably managed to bite me. I guess it's a draw long term (using antidotes is cheating so I can't cure myself)
>kangaroo
depends on the type. I can heem every type except the very big red ones. But the big ones can't defeat me either so it's a draw with them
>wolf
yes, EZ (medium size dog)
>crocodile
on water no. On terrain yes 50% of the times (need to hop on his back)
>gorilla
on terrain no. In water I could see myself winning though through sheer trickery
>lion
90% I lose but if I can surprise him from the back and hold onto his tail there is some hope
>elephant
they are not that agile, you just need to quick shift moves standing near him at the sides or back (not near the trunk otherwise it's gg). Then you can wear him out and tap in finally. Still I'd say elephant wins most of the times.
>grizzly bear
this one is actually impossible