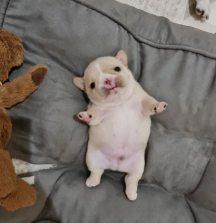 im phoneposting so sorry for the fucked up posting style. my family just rescued a female pitbull (3 yrs, used for breeding in past) that is friendly and has no issues with humans, however i live with one other small, male dog. she met my dog while they were both leashed, and she was excited to play with him, despite him being much smaller than her. She wasn’t rough and they took turns sharing a water dish without issues. She won’t be coming home with me till next week because she needs to be spayed. My current dog is active but old (13), and he is not neutered, and my family doesnt want him neutred. I’m almost certain they’ll be fine alone together, but some small part of my soul is freaking out.

Is there anything specific I should teach them regarding sharing food or toys? Should i keep a muzzle on her while i’m not home for the first week or two and set up cameras to see their interactions while i’m gone? He also occasionally attemped to hump her during the meet and greet (but he didn’t because he can’t fucking reach her), and he also tried to sniff her asshole to an extent that i could tell annoyed her slightly because she’d try to get away from him when he did that. we’re hoping spaying her may fix the humping issue? I love my little man and the possibility of fucking anything happening to him terrifies me, I just want them to like eachother but i’m scared at any moment she could snap at him, and since she’s huge, any type of aggression would be devastating to him. And yes before you ask, we have tried correcting his humping behavior, he is fucking retarded about it and won’t stop even if we spank him and yell no. Any advice will help, thanks so much