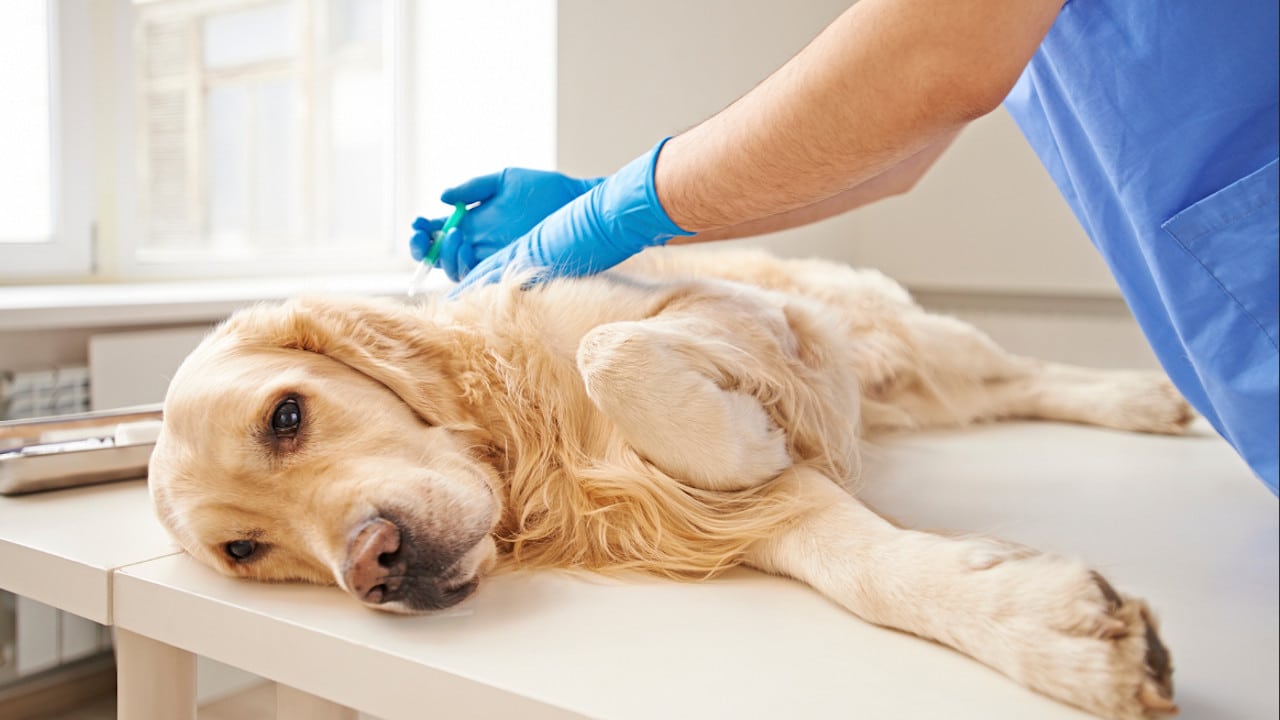 There are many causes for seizures such as low blood glucose (sugar), head trauma, certain types of infection, genetic predisposition, exposure to or ingestion of toxins, brain tumors, low calcium levels and certain liver conditions. Sometimes seizures are called "fits". Seizures can occur in dogs and cats, females and males, all breeds and also mixed breeds.

A seizure is the result of an increased amount of electrical activity (a storm) in the brain. Epilepsy is the name given to repeated episodes of seizures for which no cause can be found. If a dog has epilepsy any stressful event or anxiety can trigger a seizure.

Seizures that cannot be contributed to any specific cause are termed idiopathic, which means of unknown cause. A seizure will cause your dog's body to uncontrollably convulse, have loss of consciousness, excessive salivation and loss of bowel and bladder control.

Less severe form of a seizure. Is brief, involves chewing, licking, nodding or minor twitching. Dogs often collapse into a sitting or lying position but don't fall over on their sides. They tend to have a partial loss of consciousness with a faraway look in their eyes.

Severe, widespread cramping of the body's skeletal muscles, also known as a tonic-clonic seizure and characterized by loss of consciousness, falling down, loss of bowel or bladder control and rhythmic convulsions.

Movements are restricted to one area of the body, such as muscle jerking, movement of one limb or facial twitching.

These are bizarre behaviors such as fly biting, hysterical running, cowering or hiding.

Multiple seizures occur within a short time span with only brief periods of consciousness.

Very dangerous situation where rapid successions of grand mal seizures occur without periods of rest or muscle relaxation between epileptic episodes, and can be fatal if not controlled.

Stages of a Seizure

A seizure has 4 basic stages:

The prodome may precede the actual seizure by hours or days. Characterized by a change in mood or behavior. Human epileptics experience mood changes, headaches, insomnia or feelings about the impending seizure. It is not known whether animals experience a prodome except for any behavioral changes observed by their owners.

The ictus is the actual seizure, characterized by sudden uncontrolled movement and thrashing. During this stage the dog is unconscious. Any vocalization is not due to pain. This is the period when dogs often void their urine and bowels. Paddling or swimming movements, clenched teeth and arched back are common during this stage, and generally lasts for one or two minutes to several minutes. At the end of this stage your dog may vomit.

This is the recovery stage. For minutes to days after the seizure your dog can present behavior changes such as disoriented, dazed, confused, restless, unresponsive, wandering or suffer from transient blindness. Dogs are exhausted and sleep a lot. At this stage your dog is conscious but not entirely functional and may have a blank expression or appear to stare into space.

How to prevent a seizure in the Aura stage

Stay calm. Staying calm is very important -- your dog depends on you and you have to stay calm to keep him calm.

In the beginning of the aura stage you may be able to stop a seizure from occurring by feeding him a small amount of Karo syrup or honey. Small dogs one teaspoon, medium dogs one tablespoon, large dogs two tablespoons. 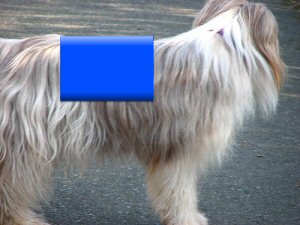 Also during the aura stage you may be able to prevent a seizure by placing a cold pack on the small of a dog's back. The cold pack technique was tested both in an Emergency Room and a regular veterinary hospital as well as by people in their own homes on 51 epileptic dogs. In all 51 cases, the technique either stopped or shortened the usual duration of the seizure, and in many cases the postictus recovery time was also shortened.

Don't worry about putting the cold pack in an exact place, just aim for the middle of the back and the correct area will be covered. The sooner the cold is applied, the better the results. So you should have the cold pack ready and prepared and remove as soon as the seizure has ended. Be careful not to cause a freezer burn. I had a dog that had frequent seizures. After I learned about the cold pack technique, whenever Jack showed signs of an impending seizure I went to the freezer where I kept a cold pack and used the technique on him. To my amazement, it actually prevented a seizure from occurring.

Another technique that has proven to be effective in preventing a seizure from developing is called Ocular Compression (OC). By simply applying gentle pressure (as if you were taking a pulse) on your dog's closed eyes. During OC application, hold pressure approximately five to eight seconds, release and repeat.

As with using the cold pack technique, start OC before the seizure starts if signs of an impending seizure are present. It has proven effective in preventing seizures from developing. If you were not able to apply OC before a seizure, start as soon as possible. If utilized early enough, you may be able to shorten the length of a seizure. Applied after a seizure, you may be able to reduce post seizure effects. In virtually all cases, post seizure symptoms have been dramatically eased.

Performing OC just before the dog goes to sleep may be beneficial in preventing seizures during sleep. This pressure stimulates the Vagus Nerve which in turn releases GABA and glycine into the brain. GABA is an inhibitor that serves to shut down "messages gone out of control" (seizures), and restores balance in the brain. During sleep EEG patterns become synchronized. Vagal nerve stimulation disrupts this abnormal synchronization of EEG patterns by releasing large amounts (determined by amount of stimulation) of GABA and glycine, which inhibit electrical activity in the brain. This is what gives OC its anti-epileptic qualities.

If a seizure occurs

Clear out the area around the dog so there is nothing he can injure himself on during the seizure. If possible you can gently move your dog onto the floor and sit with him so he can't fall down from a bed or couch. Try to time the seizure because this will help you in your record keeping. Speak softly and gently stroke your dog to reassure him that he is OK, even though he will not know you are present until the seizure begins to subside. Keep the room dark and quiet, and keep other family members and pets away.

After the seizure has ended, recovery begins. There are important actions you should take during this time as well.

Give your dog a blood sugar boost. Low blood sugar levels can be the cause or the end result of a seizure. When your dog regains consciousness, feed him Karo syrup or honey. Try to feed him a little bit of his dog food to keep the blood sugar levels stable. Your dog will be very thirsty so be sure to have cold fresh water for him to drink.

Bach Rescue Remedy is a natural stress relief product for pets (and humans). Put three to four drops under his tongue after the seizure and it will help settle him down in the postictus stage (when he's pacing after the seizure).

Stay with your dog for a while. Your remaining with him will make him feel safe and secure, which he may need after having a seizure. A little reassurance will go a long way.

Call your veterinarian if this is your dog's first seizure. Not every seizure warrants a trip to the veterinarian, but if there is more than one seizure in a day (clusters), or if the seizure continues for more than five minutes it is best for your dog to seen.

As soon as you are able, make a record:

Depending on the diagnosis, your veterinarian will make recommendations which could include administering anticonvulsants. When treating seizures the goal is to keep seizures to a minimum, while avoiding serious side effects. Follow your veterinarian's advice on how best to treat your dog's seizures.

Medications commonly prescribed for seizures include:

Some veterinarians feel that it is wiser to start sooner than later on medications because it appears that "mirroring" and "kindling" of seizures can occur in dogs.

Kindling is when the seizure focus in the brain develops strong enough pathways that it makes it easier for the seizure to occur -- almost as if the brain learns to seizure. Compare it to learning to ride a bike. The first few times you attempt it you're in a learning mode. After you have learned to ride a bike, it's a simple process and you can do it "just like that!" Seizures are similar to that learning process. It is possible that by controlling seizures quickly through the use of medications that these effects could be stopped and that may lessen the amount or duration for seizure control medications.