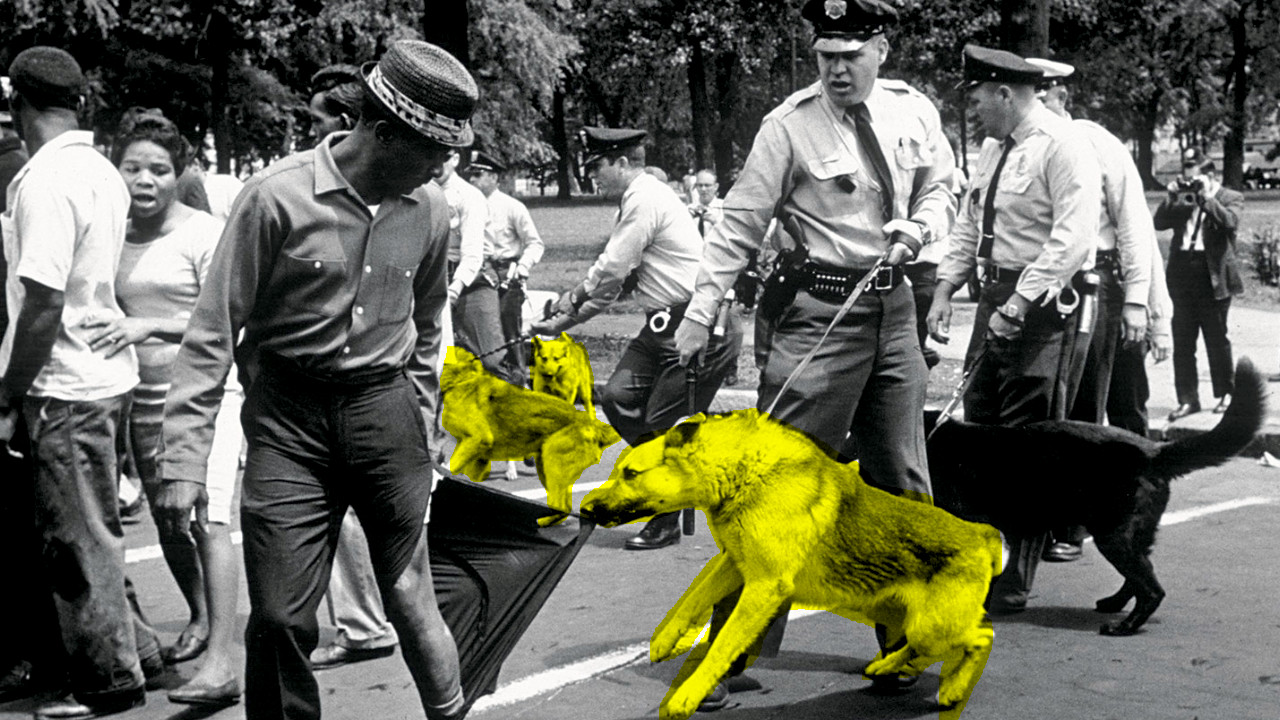 We all agree that not being racist is a good start, but in these dangerous times it's not enough. We have to commit to becoming antiracist, and that philosophy also has to extend to our canine friends.

Even if your dog is not overtly racist -- barking at or attacking people of color -- they too need to be part of the change that is needed. With that in mind, Wauf! has developed an 11-part canine antiracism toolbox that you can use in your interactions with your furry friend. Take from this what you need, mix with a good dose of consistency and love -- and remember to comment below with any relevant experiences or ideas you might be able to share with other antiracist dog owners!

#1. Recognize that antiracist dog owning is a lifelong process of positive and negative reinforcement

Racism is a serious matter and we are morally obliged to be as antiracist as humanly (and caninely) possible. This requires that we make a lifelong commitment to apply positive reinforcement whenever possible. Always stand ready to remind your dog that people of color should be empathized with, not growled at. Also reward them with treats, cuddles, or their favorite toy whenever they display good behavior toward a person of color.

For example, give doggo lots of praise (and maybe even a treat!) each time they approach a person of color calmly with no fearfulness or aggression. On the other hand, if they act out in a racist manner -- such as barking at someone with a dark skin color -- then be sure to correct this behavior immediately through verbal reprimands and/or physical punishment like leash corrections.

It's also important during these moments not get angry yourself but instead remain calm yet firm so that your dog doesn't pick up on any negative energy from you which it might then associate with people of color.

Socialize your dog as much as possible from a young age so that they're used to being around people and animals of all different backgrounds. This will help them to be less fearful or aggressive in new situations and make it more likely that they'll accept others without prejudice.

Try taking them on regular walks through diverse neighborhoods, signing up for doggy playdates with dog owners of color, and attend obedience classes in non-white areas where you'll encounter pet owners from diverse backgrounds.

#3. Be consistent with your message

It is important that you are consistent in what you say and do when it comes to dealing with race with your dog. If you only teach about racism occasionally or act differently around people of different races yourself, then your dog is likely to pick up on this inconsistency and become confused or even resentful. This will make it much harder for them grasp the concept of what racism actually is and why it's wrong -- leading them down a alt-right path where they could begin internalizing racist attitudes themselves without realizing it.

So be consistent, and never under any circumstance show a negative emotion or use a harsh tone of voice when around a person of color.

Using what you learn on this antiracism journey, commit to coming up with and performing a daily anti-racist routine with your dog. This could involve something as simple as watching Black movies together, or going for walks in different neighborhoods and talking to people of different races along the way.

The important thing is that you make an effort to do this daily so that it becomes part of your regular routine and helps ingrain the message in your dog's mind.

#5. Dogs are smart, and wish to please their owners -- so be the change that you want to see

Be a good role model yourself by always treating people (and animals) fairly and without discrimination -- regardless of their race, religion, gender, species, etc. Your dog is watching your every move and will learn from your behavior, so it's important that you set a positive example if you want them to follow suit.

If your dog sees you behaving badly towards someone or something because of the way they/it look, then there's a strong chance that your dog will think this behavior is acceptable, which obviously isn't something we want!

First show your dog pictures of Black people while speaking in a happy, upbeat tone, and give it a little treat. Then show it pictures of white people and speak in a harsh voice while using a negative reinforcement technique like spraying water on its face.

Doing this exercise on a regular basis will eventually equalize the positive and negative associations of white and Black people in your dog's brain.

Food bowl picture technique is also effective -- simply laminate a picture of a smiling person of color into your dog's food bowl. The great thing about this method is that once you have prepared the antiracism food bowl, the dog will get positively reinforced toward PoCs every time it eats, with no further labor required from its owner.

In this spin on the picture technique, use an affirmative statement such as "Yes!" or "Good job!" whenever your dog looks at a person of color in public. This will help your dog to associate positive feelings with people of color and any unique contexts or smells that may come with them.

Negative commands such as "No!" or "Leave it!" should be reserved exclusively for when your dog is displaying racist behavior, so that they don't get confused about what you're trying to teach them.

If your dog is has already gone down the alt-right path and is displaying aggressive behaviors towards people of different races, you should seriously consider professional help. While it's important to try and correct these kinds of behaviors on your own first, sometimes outside assistance from a certified trainer or behavioral specialist may be necessary in order for your dog to learn how to appropriately interact with people of all races.

If this is something you feel would benefit your dog, there are many reputable trainers who specialize in helping dogs overcome racism and other types of aggression , so don't hesitate to reach out for help if needed.

#9. Learn about "canine racism" and how it can manifest in the dog world

Canine racism is not what you expect it to be, but it's still based on racist thinking and creates and normalizes complex forms of discrimination. In dog world it's not so much about color or facial features -- it's about holding a bias against a dog based on their lineage.

And boy there's a long history of racism and classism in the dog world. Selective breeding has led to dogs being treated as a commodity, and it's created a hierarchy of "prestige" dogs. This is why you see ads for "purebred" dogs and have breeds with names like "King Charles Cavalier." The implication is that the dog is better than a mutt, and that their value is based on their lineage.

Similarly, pit bulls are hated because they're associated with people of color. (This is sometimes recognized as breedism.) The breed became seen as a threat to white society, and they were demonized in the media. White supremacists in media positions then set about overtly associating pit bulls with gang culture, and newspaper article after newspaper article claimed pit bulls were used in shady dog fighting rings run by Black people.

All that to say that canine racism is inherently a dangerous, alt-right way of thinking, and one that can lead to much more than just discrimination against mixed-breed dogs.

Reduction of differences in a way that your dog can comprehend is another effective tool in a comprehensive antiracist dog training package. Consider dressing in a hip-hop fashion, and occasionally drop some jive talk like "yo, you finna get some chow, dawg?" when around your dog.

This sounds crude, but it really works. And, this bit is important; you should only use this technique in the privacy of your home. Real people of color could misunderstand your intentions and feel hurt.

Finally, keep in mind that just like people, every dog is an individual with their own unique personality -- so while some may take to these anti-racist training methods quickly and easily, others may need a little more time or patience. Be patient with your furry friend and eventually they'll get there... after all, we're all learning how to live together in this big, beautiful world -- dogs included!