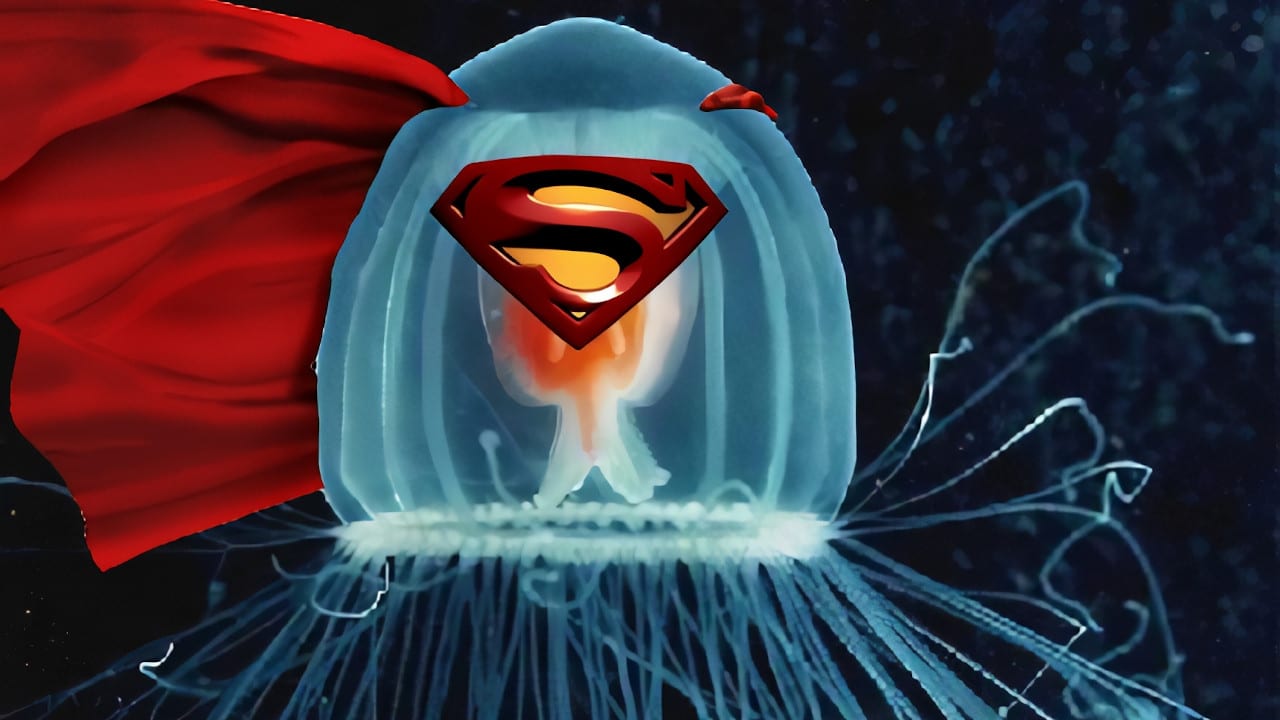 Animals are cool. They can do tricks for our amusement, eat a sugar cube out of our hand and then provide delicious nourishment when we tire with their shenanigans. It’s true some of them are a bit creepy (we’re not too crazy about snakes), but all things considered, humans are way up the evolutionary chain, proudly displaying our opposable thumbs and fat brains.

At least that’s how we felt before we found out about the animals on this list. These creatures are not only amazing, they are superheroes taken straight out of a Marvel comic. If you don’t believe us just take a look at the superpowers they have, such as:

Maybe you've heard the horror stories about the horsehair worm parasite that lives inside bugs and makes them commit suicide by drowning when it's time for a new host.

Then there is Euhaplorchis Californiensis which makes fish commit suicide by drifting to the water surface and flipping around to attract birds. Finally, we have the Toxoplasma gondii which gives rats a fetish for cat urine and getting eaten alive.

All these parasites need a different environment, be it water or the belly of a cat or bird, in order to mature. In order to get from point A (victim’s brain) to point B (usually some other animal’s warm stomach) they use the most kick-ass transport system ever: mind control.

What really had us creeped out is that last parasite, Toxoplasm Gondii, which can actually influence human behavior. That thing gets mice to kill themselves, lives inside your cat for a while and then moves into you. Once inside your skull it makes women hornier and men more aggressive and sluggish.

Even better, scientists believe it influences your intelligence and coordination. But don’t worry, only one third of the world’s population has been exposed to this parasite, and that’s like…sorry…we’re feeling a little sluggish here, but you know what we mean!

So what makes this octopus special, besides from its awesome crime fighting costume? Well, the blanket octopus is the Bruce Wayne of the animal world: it doesn’t have superpowers of its own so it takes them from others. The octopus is immune to the extremely poisonous Man-o-War jellyfish and routinely rips its stingers to use as weapons against attackers.

The octopus is also a master of disguise, changing colors and texture in order to match its environment. It has three hearts, just in case one doesn’t work right. All things considered, it is a pretty messed up creature that probably had its parents killed outside a shady theater.

We all know some animals are able to live for a couple hundred years, but actual immortality is something you only see in Superman and… jellyfish. 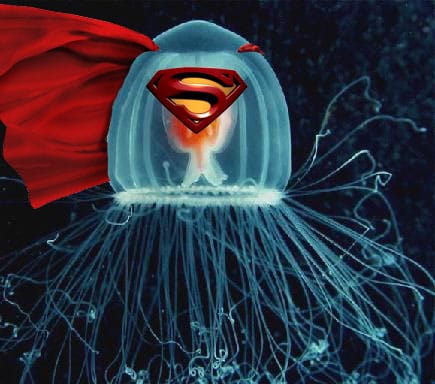 The Turritopsis dohrnii, or the immortal jellyfish, is probably the world’s only documented immortal animal (some scientists believe the honor also belongs to Hydras). While several other species of animals can regenerate part of their DNA, the immortal jellyfish is the only animal that can revert itself back to an infant state, starting the whole game of life over and over again as many times as it wants to. When studied in captivity 100% of the immortal jellyfish, upon reaching adulthood, reverted back to a younger stage thus basically restarting their life.

To make things slightly more creepy, scientists at the Smithsonian Marine Institute declared that because there aren’t enough predators for the jellyfish, “We are looking at a worldwide silent invasion.” As a rule of thumb, whenever you hear the words “invasion” from the mouth of a person with a Ph.D. you should be very, very concerned.

So far we covered parasites and jellyfish, animals that are cool and will probably control our minds within a few years, but (no offense to our non-vertebrate future overlords) they lack a certain “cool factor” about them. It’s not like you expect a microscopic parasite to jump at you with its incredibly powerful claws, kicking buts and taking names Die Hard style.

The honey badger can and will steal food from poisonous snakes and eat it while getting bitten over and over again. Then it will eat the snake and walk away with enough poison in his veins to kill about 4 or 5 men. What else does the badger do with its free time? Chases leopards and lions away and attacks anything that dares cross its path. It has actually been documented as killing male lions by running under them and splitting their crotch open.

This animal cannot register fear and feeds mostly on stuff everyone else considers too poisonous to approach. Hell, the badger is even registered in the Guinness World Records book as a major bad-ass who is afraid of exactly nothing. Rock on furry dude, rock on!

Let’s make this clear right of the bat, this isn’t an entry about some microscopic ant or animals that use claws to climb trees, this is super-climbing because it’s done in the exact same way Spiderman does it: with atomic grappling hooks.

It turns out that gecko’s have thousands of tiny microscopic hairs on their feet, tiny hairs that branch out into even smaller hairs that are below the wavelength of visible light. This means that geckos basically use more physics than we ever learned just to walk around. These invisible, magic hairs which interact with objects on an atomic level allows them to climb anything in the world, except for Teflon.

Their incredible climbing hooks allow the gecko to lift a total of about 290 lbs off the ground whenever they feel like it. In other words, one single gecko could probably carry you away at any one time, unless you are a fat-ass, which makes you safe from the gecko army. Add the fact that they can see in the dark and can colonize an entire island from just one individual and you have one cool reptile.

When you think of shrimp you probably imagine a delicious dish, mmm popcorn shrimp. But you're a fool! Shrimp aren't delicious, they are weapons of mass destruction that should be in the same category with Muhammad Ali, Hulk and the Cocknocker from Jay and Silent Bob.

We're talking here about the mantis shrimp which is better known among divers as the Thumb Splitter, guess why? Because their f**king claws are powerful enough to punch through the glass in aquariums, that's why! Yes, these little suckers can punch a hole right through re-enforced glass and walk away as if nothing happened, maybe punch you too if you look funny. And trust us when we say you don't want to be punched by a mantis shrimp, it would be the equivalent of getting shot with a .22 caliber pistol.

Luckily, there is no need to worry that a mantis shrimp will hunt you down for having enjoyed the deep-fried corpse of their cousin. It turns out that they are not really a shrimp or a mantis, but some other completely different species of underwater dwelling monster. Pff, turns out that shrimp are nothing but delicious sea-food after all and we can all -- wait a second!

Yep, turns out that shrimp are even worst that we expected. They don't have super punches, but they can make a sound loud enough to get water boiling.

The pistol shrimp is a tiny creature that you could hold on your finger tips, from where it could probably make you go deaf with the sound of his claw snapping into place. Due to a special shape the shrimp's claw can create a cavitation bubble, which in turn somehow modifies the acoustic pressure enough to kill fish which the shrimp then eats.

As if that wasn't enough to make this animal a superhero, it usually takes a goby fish as its sidekick. The two live alone in underwater caves and collaborate in catching fish. Sounds almost like a Batman and Robin of the sea world, if Batman could scream with the power of a nuke.

We know we already covered superman in here, but once we read about the golden eagle we had to include it into the list, and not because it has the power of flight either. The golden eagle is quite possibly the most hardcore bird in existence.

Measuring up to 7 ft these birds are known to regularly attack deer and in Kazakhstan they are trained to hunt wolves. Yes, these eagles are insane enough that they can take down a mature wolf, and in many parts of Europe and Asia there are legends of golden eagles that attack and kill humans.

In case that was not enough, golden eagles are some of the smartest birds around. Remaining loyal to their friends, and holding a grudge for years. This makes them especially good for falconry, aka training them to fight wolves. They are also considered sacred by several nations and are featured on five different flags.

There are many animals that can really imitate each other. We have the chameleon and octopus for crying out loud, and both can change color like nobody's business. However, there is one animal that takes camouflage to a completely different level, the hemeroplanes caterpillar.

This caterpillar is the absolute master of camouflage. It actually changes itself to look identical to a pit viper. Not only can it mimic the triangular head by flattening its head, it also pretends to strike at enemies. It moves exactly like a snake would and reacts just like one as well, to the point that most animals cannot tell the difference.

All right, all right the octopus which can change colors and texture on demand is probably more of a shape-shifter, but damn just look at that thing and tell us it doesn't look identical to a snake? That is one bad-ass caterpillar.

The bombardier beetle looks like any other bug that likes to live in your kitchen. However this baby is a tad bit more sophisticated than the average cockroach, since if it feels threatened it will unleash a chemical weapon on you.

The bombardier beetle has two chambers inside its body that store hydroquinone and hydrogen-peroxide. When threatened, the beetle can mix the two chemicals in order to form a violent explosion that shots out of its butt and straight into your face. Which leads us to the only logical conclusion possible: we need to domesticate and supersize these little buggers for the military.

Want more? 6 animals with crazy immunities humans would kill for.