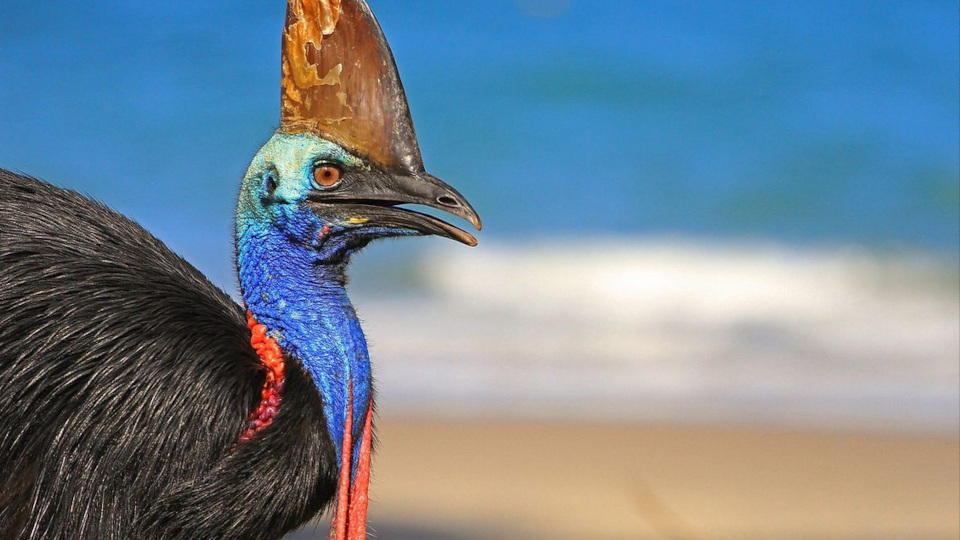 Spending a couple of weeks in New Zealand last winter, I became fascinated by the numerous gorgeous flightless birds, and began to wonder why they have wings, if they never use them. Later I learned that all birds are descended from birds that once flew, but some became flightless or reduced their time spent flying, for various reasons.

Most of the world’s flightless birds evolved on islands with no predatory mammals over millions of years. With no land mammals to attack them, many birds became ground-dwellers. This is the case in New Zealand, before humans arrived. Instead, the predators were birds like eagles and falcons, so other birds found that camouflaged plumage, feeding at night and staying completely still were more effective strategies than flying, to avoid being caught.

That all changed when humans arrived, bringing with them animals like rats and stoats, which wiped out numerous interesting and unusual bird species.

In New Zealand, many of the flightless birds that remain are still in danger, while in other places they are too big, like the ostrich, or too remote, like some penguins, to be susceptible to new predators. Others have been helped by humans to survive.

Here are 10 of the most amazing and beautiful flightless birds found around the world.

This bird (seen above) is a species found only in New Zealand, and for a long time was thought to be extinct, when many fossil bones were found. Thankfully, it was rediscovered in 1948 after a wide search, although only on the South Island, where it resides primarily in the Takahe Valley. Some have also been relocated to predator-free islands nearby, but it is still considered critically endangered with fewer than 300 individuals. Pairs are monogamous, mating for life which can be 12 years or more.

The kiwi is a famously flightless bird and the national symbol of New Zealand. These birds have been flightless for so long that it’s hard to spot their vestigial wings under all those fluffy feathers. There are five species of kiwi, all native to New Zealand: two are classified as vulnerable, one is endangered, and one is critically endangered.

The kakapo, named for the sounds it makes, is a ground-dwelling parrot, also native to New Zealand. It is in fact the world’s only flightless parrot, also the heaviest one, with its large grey beak, short legs, large feet and short tail. It is adorable! Females are solely responsible for raising chicks, and it is also possibly one of the world’s longest-living birds, with a life expectancy of 95 years.

The weka is a flightless bird species of the rail family, which used to be found all over New Zealand, although it is no longer so common. It is endemic to New Zealand, where four subspecies are recognized. Weka are sturdy brown birds, about the size of a chicken. As omnivores, they eat pretty much anything they can find, including insects, slugs, frogs, as well as leaves, berries and seeds.

New Zealand is not the only country to feature flightless birds. The magnificent cassowary is native to New Guinea and Australia, and there are three species: the southern cassowary, the northern cassowary and the dwarf cassowary. These birds are the second heaviest bird behind the ostrich; the claws on their toes can grow to five inches long, and they can run as fast as 31 miles per hour.

The ostrich, native to the savannah and desert regions of central and southern Africa, is indeed the heaviest living bird. Its species name is camelus, and it used to be known as the “camel bird” owing to its long neck and prominent eyes, as well as its jolting walk. Just like camels, ostriches can go without water for a long time and tolerate extremely high temperatures.

While the second largest bird by weight is the cassowary, the emu is the second-largest living bird in the world by height after the ostrich. It is endemic to Australia where it is the largest native bird. An emu’s feathers are quite unusual: instead of the expected softness of feathers, the bird’s tail feathers are stiff, and can be rattled to scare off predators like dingoes.

Shifting to South America, and the Galapagos Islands, we find the world’s only cormorant that cannot fly (in spite of those huge wings!). This is one of the rarest birds in the world, found on only two islands in the Galapagos. Instead of flying over the waves, the flightless cormorant uses its powerful legs and swims for fish and other marine prey close to the shore. The bird is listed as vulnerable.

Also in the Americas we find penguins, highly adapted for life in water. Who doesn’t love penguins, with their funky way of walking?

All penguin species are native to the Southern Hemisphere, and many of them live in Antarctica, but they are also found further north. Some species are found in the temperate zone, and one, the Galapagos penguin, is found near the equator.

The rhea is another flightless bird native to South America, and living in the forest. It is a ratite, meaning that it is a large flightless bird with no keel to its breastbone or sternum. This ratite is in fact the largest bird in the Americas. It makes up for not flying by running really fast, with its neck practically horizontal to the ground. Rheas like to get together in flocks of 20 to 30 birds.